At the beginning of this month, Lenovo-owned Motorola had launched the Moto Z3 smartphone in the U.S. Earlier this week, Motorola had confirmed that it will be holding a launch event in Wuhan, China on Aug. 15 without mentioning the name of the device it would be unveiling. Today, the company has confirmed through Weibo that Moto Z3 is the handset that will be made official on Aug. 15’s unveil event. 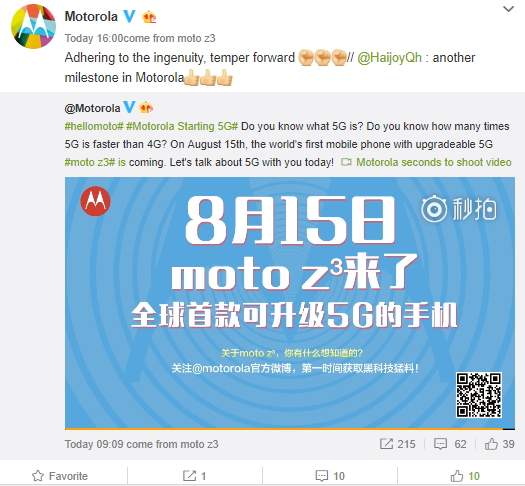 The Moto Z3 is being touted as “the world’s first upgradeable 5G mobile phone” as it will be arriving with 5G Moto Mod accessory. Also, Jingdong Mall has already stared with the reservations of the Moto Z3 in China. The JD listing of the smartphone reveals that China will be receiving the Moto Z3 handset with 6 GB of RAM and 128 GB of storage. The U.S. variant of the phone features 6 GB of RAM and 64 GB of storage. As of this writing, there is no information on the pricing of the Moto Z3 for China. In the U.S., it was unveiled with $480 pricing.

Recent reports have gained China may beat U.S. in race to commence 5G connectivity. Hence, the arrival of the Moto Z3 may allow people in China to take advantage of 5G speeds at the earliest.

Moto Z3 Play, Moto E5 Plus, Motorola One and One Power phones have been certified in China in the recent weeks. There is a possibility that the company may also some of these phones too at the Aug. 15 event.