Last month, Vivo took the wrap off their first ever Snapdragon 845-powered flagship phone which is none other than the Vivo NEX S. Right now, another mysterious Vivo smartphone with the same SD845 SoC has been spotted on Geekbench listing carrying the “Vivo 1805” moniker. 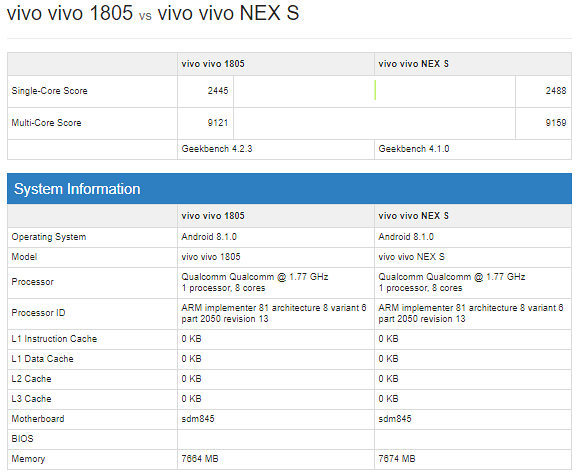 Although the listing doesn’t reveal much information on this handset, but reports have been suggesting that this could very well be the second flagship device to be introduced by the Chinese company later this year. It’s worth noting that the device will also be coming with a hefty 8GB of RAM onboard along with the Android 8.1 Oreo running in the background.

Keeping in mind that Vivo did not announce any flagship devices last year, this would definitely be a major change to the company’s product roadmap as they seem to be shifting their focus from premium mid-ranger smartphones to the higher-end flagships.