Yesterday, Chinese manufacturing giant, oppo released its new oppo R17 smartphone but this device will go on sale in about four days. Recently, a variant of the oppo R17 dubbed oppo R17 pro appeared on 3C listing and now, this piece of information has been affirmed as a new Oppo smartphone suspected to be the Oppo R17 Pro has just appeared on the Geekbench. According to the listing, the details of this smartphone is not entirely clear but it will ship with the new Qualcomm Snapdragon 710 chipset which is a quasi-flagship processor designed to bridge the gap between flagship performance and mid-range performance. In addition, it will also come with 8GB of RAM which is slowly becoming a norm for flagship devices. Though there is no information on its storage capacity, with 8GB of RAM, the internal storage should not be less than 128GB. 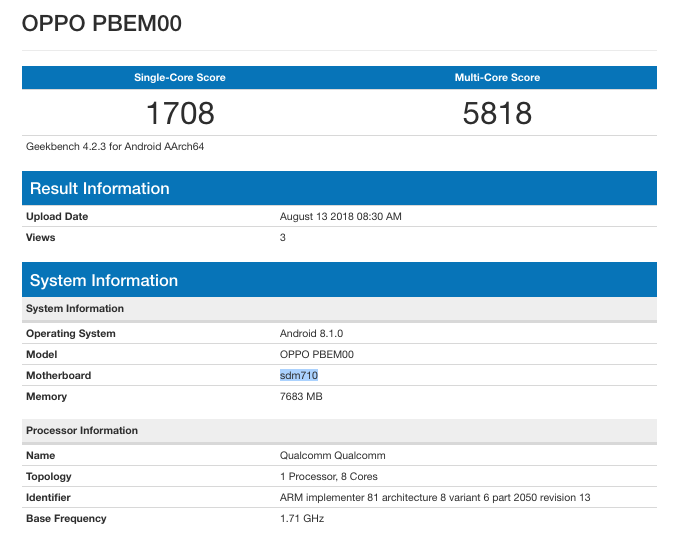 Recent information suggests that the oppo R17 Pro will come with a triple rear camera as well as an on-screen fingerprint sensor. These piece of information were highlighted on a recent appearance on Weibo which shows a website page for oppo R17 Pro. The oppo R17 Pro is expected to be a high version of the recently released oppo R17. Presently, the features of this smartphone are not confirmed and its exact upgrade over the oppo R17 is unknown.