Samsung Galaxy S10 series is heavily pegged to go official in February. It is expected to include smartphone such as Galaxy S10 Lite, Galaxy S10, Galaxy S10 Plus and Galaxy S10 5G. Rumors have it that the S10 Plus will be arriving with dual front-facing cameras and triple rear shooters. Fresh renders of the S10 Plus have surfaced today to reveal its design. 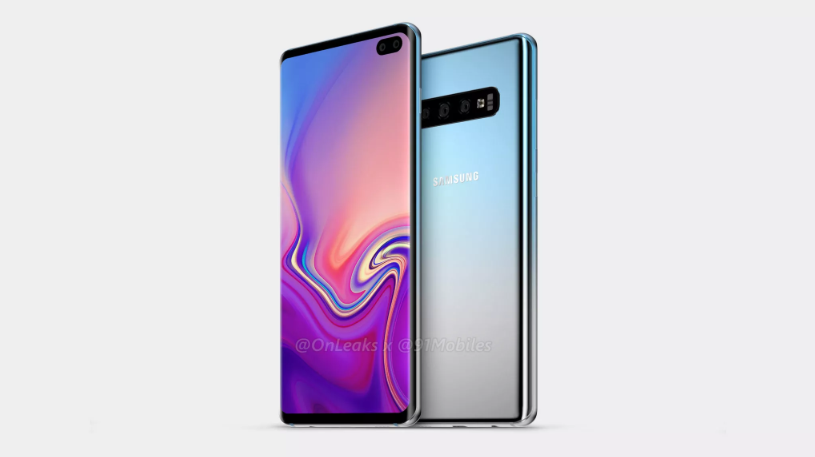 The Galaxy S10 Plus renders reveal that the back panel of the phone features a bluish white gradient color glass rear. The front side of the phone is mainly occupied by the screen. The screen is curved towards the edges. The upper and lower bezels are quite slim. At the right corner of the display is a dual front-facing camera.

The smartphone is expected to feature a 6.4-inch AMOLED display that will carry support for Quad HD+ resolution. The display of the phone will be embedded with an in-screen fingerprint reader. The handset will be measuring 157.5 x 75 x 7.8mm. As far as triple camera setup is concerned, it is expected to feature a regular RGB lens, a telephoto lens and a wide-angle lens. The smartphone is equipped with a USB-C port and a 3.5mm audio jack. There is a Bixby AI button on the left edge.

The Android 9 Pie OS with the One UI skin placed over it will be preloaded on the device. It is rumored to feature 12 GB of RAM and up to 1 TB of RAM. It is likely to be available in Snapdragon 8150 and Exynos 9820 chipset variants.