Samsung was heavily pegged to introduce dual rear camera feature on Galaxy S8 and Galaxy S8+ phones. However, the feature was not made available on these phones. Since Galaxy S8 prototypes showing twin rear cameras have surfaced in the past, the rumor mill has been speculating that the Galaxy Note 8 will not be the first dual rear camera phone from Samsung. 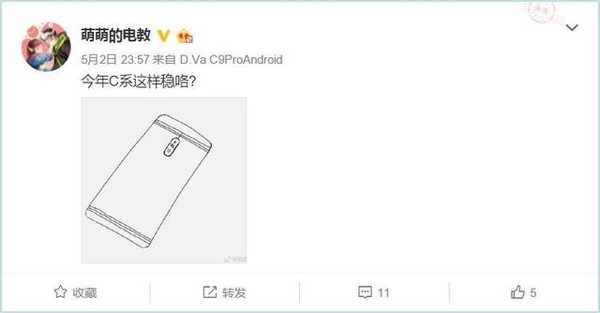 Fresh information suggest that the first dual rear camera may first arrive on a next generation Galaxy C series smartphone. A leaked drawing of the unnamed Galaxy C has appeared on Weibo which shows a vertically arranged dual rear camera. The antenna bands can be seen on the top and bottom of the back panel of the phone that is expected to full metallic chassis. Samsung has been criticized for placing the fingerprint scanner on the rear sides of Galaxy S8 and Galaxy S8+ as they are not easily accessible. The leaked drawing shows that there is no fingerprint scanner on the rear side which probably indicates that the biometric recognition feature will be present at the front.

Speculations have it that the Snapdragon 660 chipset would be powering the mysterious Galaxy C phone. Leaked information on the specifications of the unannounced Snapdragon 660 SoC suggest that is supports dual rear cameras. Also, there are many SD 660 powered smartphones under the wraps such as Oppo R11, Redmi Pro 2, Nokia 7/8 and more that are rumored to house dual rear cameras.

Snapdragon 660 Official Unveil to Happen on May 9, Press Invitations Sent