Last week, we heard the news from GSMArena that the upcoming Huawei P20 series will not be announced during the upcoming Mobile World Congress 2018. Instead, this highly anticipated flagships will make its debut on a standalone launch event on March 27th next month. 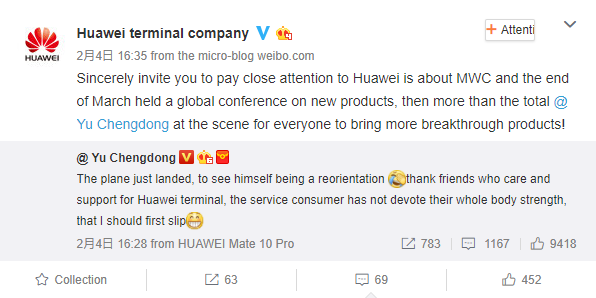 Right now, Huawei’s official Weibo microblog had revealed that the Chinese company will in fact be holding two different launch events with one during the upcoming MWC 2018 and another in March. This of course, will be a piece of good news for all Huawei fans out there as it was initially thought that the Chinese smartphone giant will not be unveiling any handsets during this year’s MWC.

Since the P20 series is already slated to be announced on March 27th, the question here is who will be the star of Huawei’s upcoming launch event during the MWC? Although right now there are still relatively little information on what the smartphones could be, but we believe it could possibly be one of the following handsets with model numbers AUM-xxx, ATU-xxx, FLA-xxx, LND-xxx, as well as LDN-xxx  which were recently certified by Bluetooth SIG as spotted by renowned leaked Roland Quandt.

According to him, out of the five new upcoming smartphones, only the one with FLA-xxx model number is a mid-ranger while the rest are expected to be low-end devices. As of now, there are still a couple of weeks before the MWC 2018 officially kicks off so you can expect to hear more about these handsets as the day inches towards the event.