Xiaomi has officially confirmed that it would be debuting the Xiaomi Mi MIX flagship with 2.0 design. The design improvement on the Mi MIX 2 suggests that it would be delivering higher screen-to-body ratio than the predecessor model. Xiaomi’s founder Lin Bin has released a video on Weibo to tease the Mi MIX 2. Moreover, he also hints that the company may also unveil something else on the same launch date 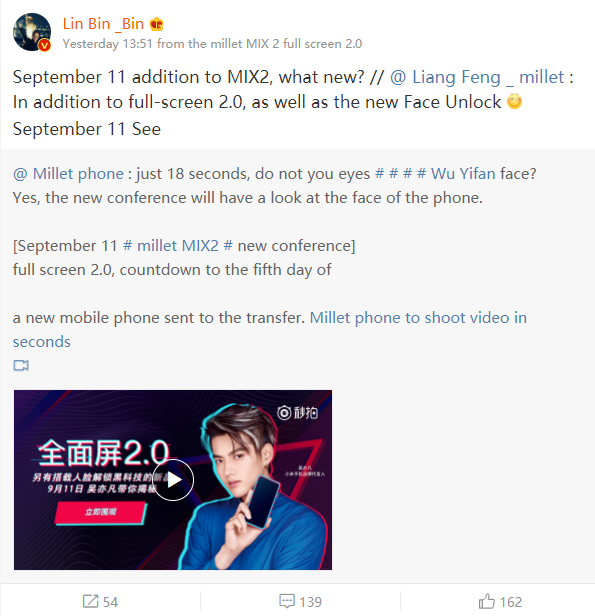 The above message from Lin Bin on Weibo states that the company would be unveiling Xiaomi Mi MIX 2 and facial unlock feature on Sep. 11. However, he has also hinted that there could be another device arriving with the Mi MIX 2.

Last year, Xiaomi had unveiled the Mi Note 2 and Mi MIX concept phone together in October. Hence, speculations are rife that the Chinese firm may debut the Mi Note 3 alongside the Mi MIX 2. Rumors have it that the Mi Note 3 would be featuring a 5.46-inch FHD display, Snapdragon 660 chipset, 6 GB of RAM, 64 GB of storage, 16-megapixel front camera and dual rea cameras with optical zoom.

The above Weibo post also contains a video that shows well known celebrity showing off the Mi MIX 2. However, since the video is blurry, it is not easy to understand the design of the phone.

Google Pixel 2 Leaked Images Surface Along with Plenty of Features