Chinese manufacturing giant, oppo, is getting set to unveil the oppo R17 Pro series on August 23. There have been numerous teasers, speculations, and rumors regarding this series which have let out almost all the feature of these smartphones. For now, we have oppo R17 and oppo R17 Pro in the R17 series and while we wait for the arrival of oppo R17 Pro, latest information suggests that reservation for the oppo R17 which was announced last week has commenced today on Jingdong Mall. 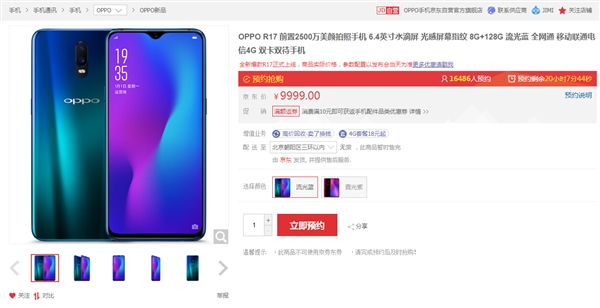 Compared with the previous generation R15, the biggest change of OPPO R17 is the use of a 6.4-inch water drop screen, which has a screen-to-body ratio of 91.5%. The rear uses a magic gradient design and it is available in two colours which are streamer blue and neon purple. Under different light conditions, this smartphone gives some sort of shadow flow which gives it a premium appearance. This smartphone is the first smartphone to come with a light-sensitive on-screen fingerprint sensor, which is OPPO’s first on-screen fingerprint mobile phone. According to the official introduction, it uses a 2mm × 2mm large photosensitive elements to make the fingerprint image clearer, and supports WeChat and Alipay fingerprint payment.

OPPO R17 is powered by a Snapdragon 670 processor coupled with up to 8GB of RAM (highest variant) +128GB internal storage. It uses a 3500mAh battery capacity which supports VOOC flash charging. This gives you up to 2 hours call time after charging for 5 minutes. In addition, this smartphone front-end uses a 25-megapixel camera, supports custom beauty features, and provides 8 modes of face-lifting and makeup. At the same time, its AI feature intelligently learns your beauty habits, making you more beautiful.

Vivo V11 Specifications and Images Leaked Ahead of September Launch