Yesterday, we just reported that the highly anticipated Xiaomi Mi Mix 2 will be made official on September 11th later this month. Right now, a new teaser for the device had been released as well – showing that the device will in fact be coming with a tri-benzel display similar to the Essential Phone as well as the newly announced Sharp Aquos S2. 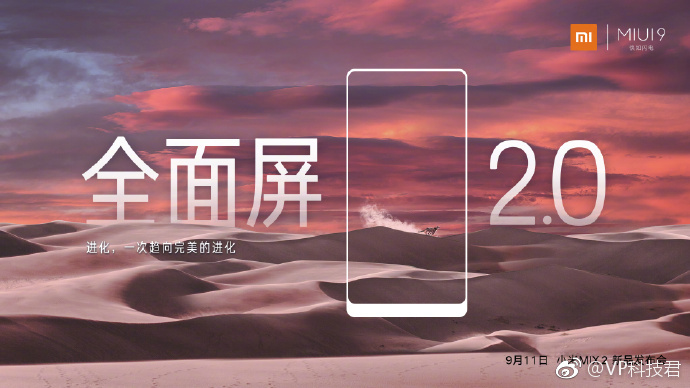 That being said, it is pretty obvious from the poster that the upcoming Mi Mix 2 would have a smaller bottom benzel as compared to the current Mi Mix – even though most of us definitely prefer the Chinese company to ditch the bottom benzel completely. Whatever it is, we’re still pretty certain that the Mi Mix 2 will not disappoint us in terms of its design bearing in mind that the device is a work by world renowned designer Phillippe Starck.

According to rumors, the Xiaomi Mi Mix 2 will be sporting a 6.4″ QHD display which is powered by a Snapdragon 835 SoC along with 6GB/ 8GB of RAM and 128GB/ 256GB internal storage space under its memory compartment. This time round, the device is also purported to come with a 3D facial recognition technology on top of a fingerprint sensor. Software-wise, it is expected to run on Xiaomi’s own MIUI 9 on top of the Android 7.1.1 Nougat out of the box.

Xiaomi MI MIX 2 Will Be Official on September 11