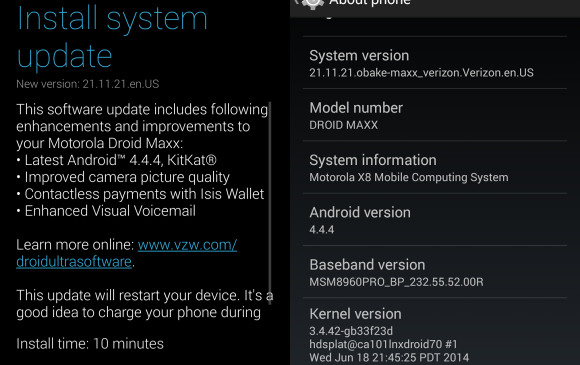 It seems like Verizon is prepping to release the Android 4.4.4 update to their Motorola DROID Maxx, Ultra and Mini handsets in the next few weeks.

The carrier has already rolled out the update to their registered Motorola testers on their Feedback Network so it wouldn’t be long before it is being officially pushed out. Currently, these 3 handsets are running on the Android 4.4.2 firmware which means Verizon will be skipping the Android 4.4.3 update this time round.

The update should be available over-the-air and carries a massive file size of 285MB. We’re not sure what changes this update will bring, but it should be none other than some minor bug fixes as well as software optimizations here and there.

Xiaomi Mi4 will be announced on July 22th

Is this the upcoming Moto X+1 flagship?