Earlier today, an alleged company in Hangzhou China had sent all its employees a letter which is known better as the notice of patriotism. 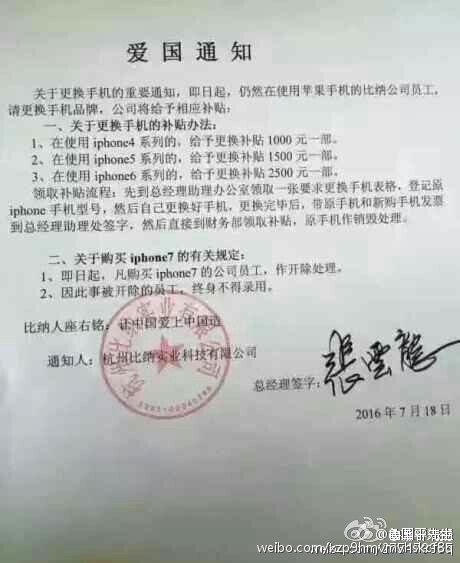 According to the letter, the company request all employees who are currently holding on to an iPhone to switch to another brand instead. The company also stated clearly that they will give out compensations to those who abide by the company’s request and will be compensated as follow:

Needless to say, the company had also taken a film stance against those who are planning to purchase the upcoming iPhone 7. Those who are found using the device will be fired immediately and will not be eligible to be reemployed by the same company ever again… And all these harsh measures are just simply because the company believes in supporting their own home-grown products like Xiaomi and Huawei.

From what we understand, this company only has approximately 50 employees and the majority of them are using devices from Apple, Huawei as well as Xiaomi. As of now, around 5 to 6 of the employees had already taken the application form to receive their reimbursement from the company.