The Honor Note 10 is the next major smartphone from the Honor and this has been confirmed by none other than Honor’s President Zhao Ming. Today, two screenshots of the Honor Note 10’s product page has surfaced on Weibo. These images have not only revealed the appearance of the smartphone, but also some of its key specs. The images reveal that the Honor Note 10 could be sporting a metallic chassis. The rear is in gold and there is a white front panel. The backside of the phone is fitted with a dual camera and a fingerprint reader. The front panel of the Note 10 is mainly occupied by the large-sized display. With slim bezels around the display, it appears that it may carry support for 18:9 aspect ratio. 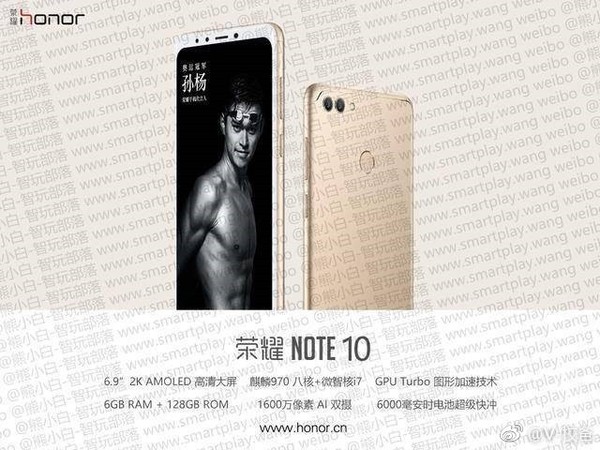 The above image reveals that the Honor Note 10 will be featuring a 6.9-inch Super AMOLED display that will carry support for 2K resolution. The Kirin 970 SoC is present under the hood of the phone. The SoC will be coupled with 6 GB of RAM. It may arrive with a native storage of 128 GB. The rear panel has an AI powered 16-megapiel dual camera. Lastly, it is packed with a gigantic battery of 6,000mAh capacity.

There is no information available on the launch date of the Honor Note 10. It seems that the company may debut it within the third quarter of this year.

Huawei Writes The US As FCC Proposal Could Bankrupt Local Carriers