Chinese manufacturing giant, Huawei, has been on top of the Chinese smartphone market for some time now. Last year, the company (including its Honor sub-brand) shipped about 153 million units of smartphones and it ranked first in China and third in the world. Now, Yu Chengdong, CEO of Huawei’s consumer business has said that the company is set to ship almost 200 million units this year and if it can achieve this feat, it will probably be ranked second in the world depending on the performance of other OEMs. 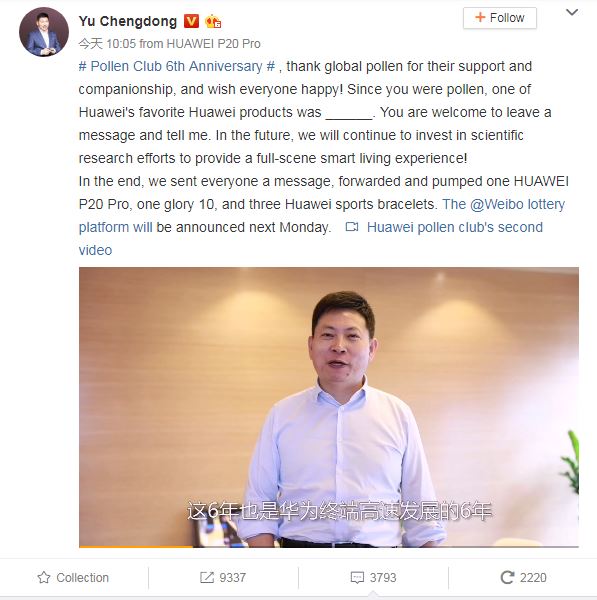 Yu Chengdong made this statement in a video on Weibo which he made to congratulate and celebrate with Huawei Pollen Club members as the club is set to commemorate its 6th anniversary. He also revealed that the Huawei Pollen Club has experienced an exponential growth from last year to this year. As of last year, the club had 40 Million members but as of now, it has about 70 million members which is close to a 100% increase.

According to the CEO, the members of the Huawei Pollen Club are free to suggest what they will like to see from the company in the future. He reiterated that Huawei is investing more funds and efforts on its R&D team so as to unleash new innovations for its numerous fans. Huawei’s policy is to present global customers with a full range of devices, not only smartphones but also tablets, PCs, smart wear, sports health devices, and so on.