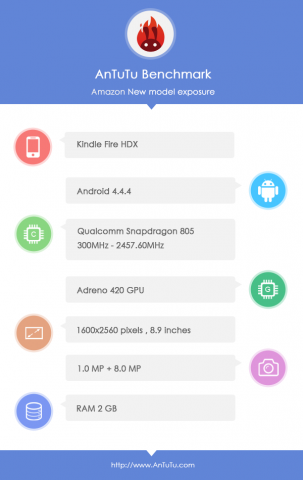 It has been quite awhile since we last heard about the Amazon Kindle Fire tablet, but that doesn’t seems to be the case anymore. Today, a new Kindle Fire HDX 8.9 tablet running on the Snapdragon 805 chipset has been spotted at AuTuTu Benchmark. Besides an upgraded chipset, the tablet is also running on the latest Android 4.4.2, up from Android 4.2.

Other than that, the new Kindle Fire HDX 8.9 seems to have the same spec sheet as the 3rd generation’s which include a 8.9-inch 2560×1600 pixels display, 2GB RAM, choice of 16/32/64GB internal storage, 8.0MP rear camera and finally a 1.0MP front shooter. What we do not know is whether will this tablet come with the same design as the old one although they have similar display size.

So far, Amazon has yet to drop any hints regarding this tablet but there is a high chance that it’ll be unveiled during the IFA 2014 event next month.

How to root Micromax Canvas Gold A300

LG G3 will be available in 2 more colors next month