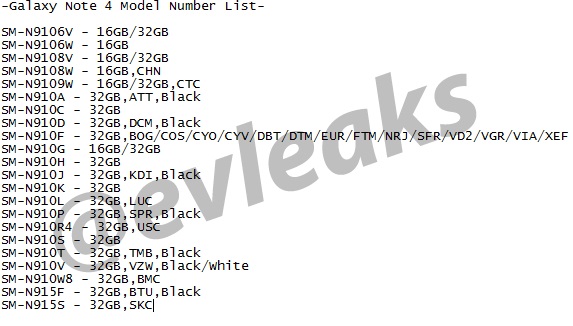 The upcoming Samsung Galaxy Note 4 which is slated to be announced somewhere during September has became a common topic for discussion among Android enthusiast recently. Today thanks to @evleaks, we’re now able to have a look at the model number for the much anticipated phablet along with some other information.

According to the leaked document, the Galaxy Note 4 will come in both 16GB and 32GB versions – with all the big 4 carriers namely AT&T, T-Mobile, Verizon and Sprint all bringing the 32GB variant with them. The next thing we know is that this phablet will come in 2 colors namely Black and White, although we expect Samsung to release more colored variants later in the year as well.

You can expect more rumors and leaks to be available soon enough. Do tell us what you think about the Galaxy Note 4 at the comments below!