Motorola has couple of smartphones that are waiting to get unleashed. The company has sent out invitations for an upcoming launch event that will be hold on July 25. Speculations hint that this event will unveil the Moto Z2 and Moto Z2 Force

The media invites that have been sent out contains the text “you won’t want to miss this.” It carries an image of a color tunnel and it includes #hellomotoworld hashtag. The launch event will be hold on July 25 in New York City. The Moto Z2 and Moto Z2 Force are the upcoming flagship phones from the company. 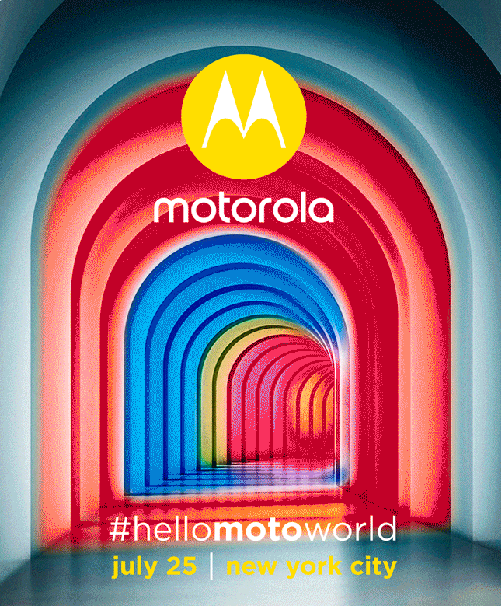 The Moto Z2 was recently spotted on GFXBench which indicated that the company may be testing the phone before its official announcement. The Moto Z2 has also appeared on AnTuTu. These listings have revealed that the Moto Z2 would be equipped with a 5.2-inch Quad HD screen. It would be driven by Snapdragon 835 chipset and 4 GB of RAM. It will be coming with a 64 GB native storage. Its front-facing camera is of 5-megapxiel. It will be coming with dual rear cameras. One of its sensors will be of 12-megapixel.

The Moto X4 is also one of the smartphones that is speculated to get unleashed soon. The smartphone is rumored to debut on June 30, but newer information has revealed that its arrival has been delayed probably because Qualcomm is struggling to meet the demand of Snapdragon 660 chipset which is rumored to power the Moto X4 as well as various mid-range phones.

Upcoming Sony G8441 has been benchmarked by AnTuTu