Redmi is going to launch the Redmi Note 7 Pro in the coming month after China’s Spring Festival. Redmi President Lu Weibing has started a new poll to know the most wanted feature on the Redmi Note 7 Pro. The poll reveals that most people are looking forward for stronger processor performance on the handset. 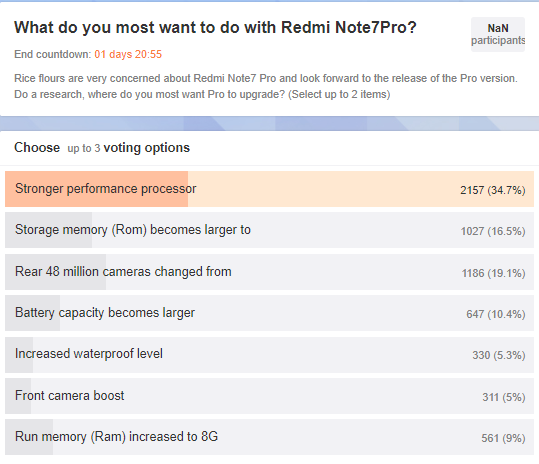 The above screenshot shows that nearly 35 percent Redmi fans want to see a more powerful chipset on the Redmi Note 7 Pro. Around 19 percent have voted for improved 48-megapixel rear camera. Nearly 16.5 percent people are expecting the Note 7 Pro to arrive with larger internal storage. Other poll options such as higher capacity battery, increased water-resistance, better front camera and 8 GB of RAM have received less votes.

Redmi had already confirmed at the launch event of the Redmi Note 7 Pro that it would be arriving with an upgraded Sony IMX586 48-megapixel rear camera. The handset is also rumored to arrive with the more powerful Snapdragon 675 chipset. Recent reports have suggested that it may arrive in 6 GB RAM + 64 GB storage and 6 GB RAM + 128 GB storage models. the handset may carry a price tag of 1,599 Yuan ($238).

Samsung Galaxy A50 to feature a triple-camera setup