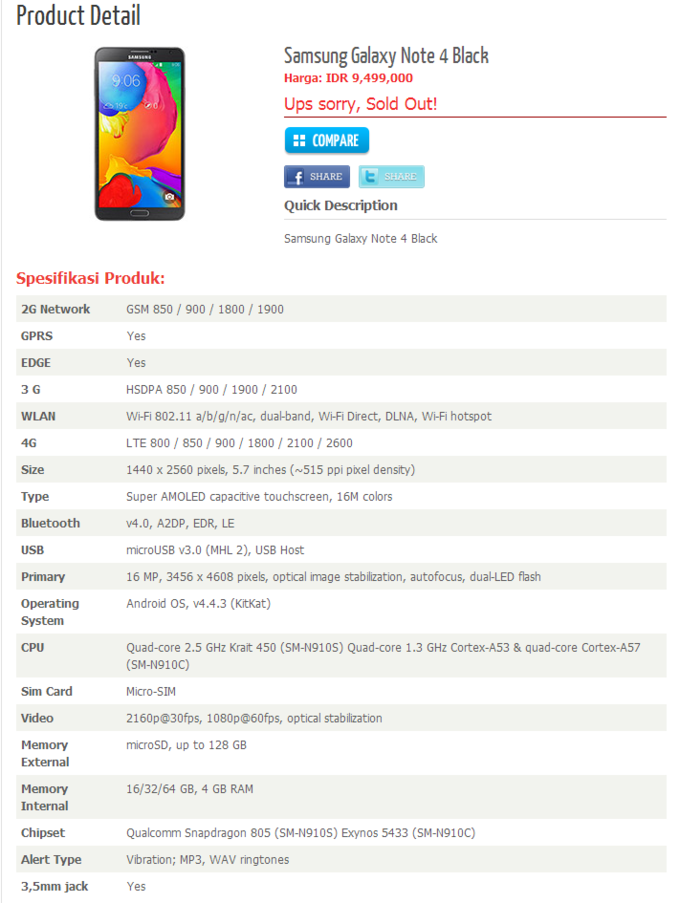 Presenting to you the unofficial spec sheet for the Samsung Galaxy Note 4! Apparently, this grabbed from one of the Indonesian e-store, erafone. This gives us a sneak preview of what to expect from the upcoming Galaxy Note 4 which is slated to be unveiled on September 3rd, one day prior to the official IFA event held in Berlin.

According to the website, the Galaxy Note 4 will have an impressive 5.7″ Quad HD display which will either be powered by the latest Snapdragon 805 chipset, or Samsung’s own Exynos 5433 chipset. As expected, the phablet will have a massive 4GB of RAM onboard the device. Storage-wise, there will be a choice of either 16GB, 32GB or 64GB.

From the camera department, you will be able to find an incredible 16MP camera at the back of the device. Sad to say, there isn’t any information on its front-facing camera. Other than that, the device will be supporting most of the standard connectivity features including Bluetooth, NFC and etc.

With such a high-end spec sheet, of course we wouldn’t expect to come with a cheap price tag. According to the website, the Galaxy Note 4 will cost around IDR 9,499,000 (~$820) – so it’s time for you to start saving up if you’re planning to get this device anytime soon!

Samsung Galaxy Alpha is now available for pre-order in UK