Since several years, Samsung is rumored to be working on a foldable smartphone. Recent speculations have revealed that the smartphone would be launching in the next year. Its arrival seems to be drawing near as it has allegedly received Bluetooth SIG certification. Earlier in this year, Samsung had trademarked the Galaxy X moniker. Hence, speculations are rife that the Galaxy X could be the rumored foldable phone from the South Korean company. 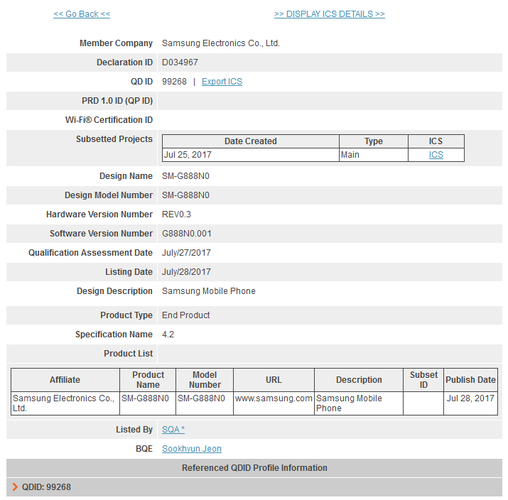 A new smartphone from Samsung with model number SM-G888N0 with Bluetooth 4.2 has been certified by Bluetooth SIG. The same model number had received Wi-Fi certification from Wi-Fi Alliance few weeks ago. Speculations are rife that it could be the Galaxy X foldable smartphone. The Wi-Fi certification had revealed that the SM-G8888N0 is equipped with Android 6.0.1 Marshmallow OS.

Even though the alleged Galaxy X is equipped with lower specs, it will possibly arrive with upgraded specs. Rumors have revealed that the forthcoming Samsung’s foldable smartphone would be equipped with fold-out mechanism that can be unfolded to use as a smartphone.

Some rumors claim that Samsung will sell only 100,000 Galaxy X units to check the response of the market. Rumors have also suggested that Samsung’s first foldable phone would be available in two sizes that will be available as Galaxy X and Galaxy X1.