Last week, the Sony Xperia T3 made its first debut in the Hong Kong market and now it has finally arrived in Taiwan. The Xperia T3 is now available for purchase via their Taiwanese online store at a price of just TWD10,990 (~$378).

Sad to say, the device has already went out of stock according to the website. However, interested buyers can still sign up to receive updates about its availability.

Similarly, the Xperia T3 is also up for pre-order in the UK market via Carphone Warehouse – which has quite a number of mobile contracts for you to choose from across several carriers. 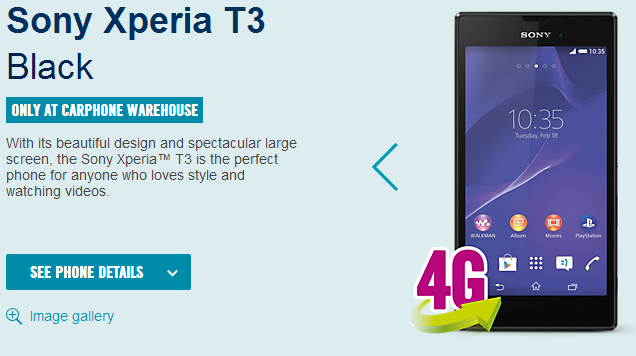 For those of you who do not know, the Xperia T3 is a mid-range handset sporting a 5.3-inch 720p display powered by a Snapdragon 400 chipset along with 1GB RAM, The device is also equipped with 8MP Exmor RS camera at the rear as well as a 1.1MP shooter at the front for selfies. Powering the device is none other than a 2,500mAh battery – sufficient for a day of entertainment.

According to a tipster, the next destination for the Xperia T3 will be India and Singapore. Right now there is still no news on whether Sony is planning to release the handset in the South American market, so stay tune for more updates!

LG G3 is now available for just $99 via Best Buy