Yesterday, a leaked image containing the entire specs of the alleged Vivo NEX S smartphone had surfaced online. Today, images of the brochure of the Vivo NEX smartphone have surfaced on Weibo to reveal some of its key features. 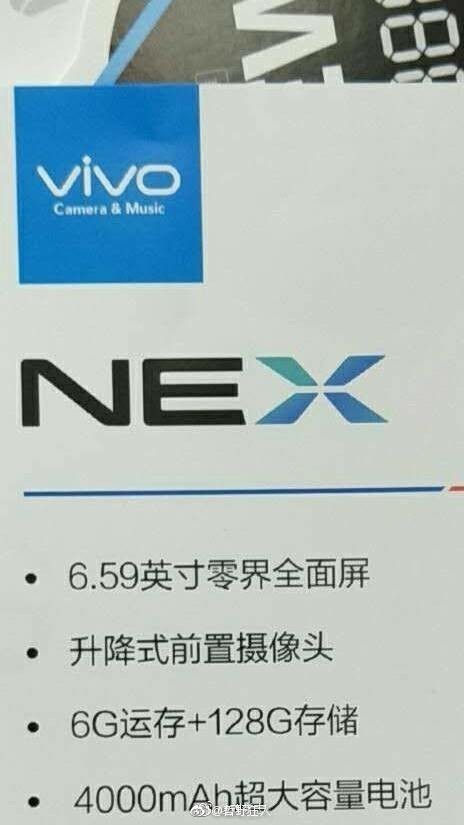 As it can be seen in the image above, the Vivo NEX will be coming with a massive display of 6.59 inches. It will be equipped with a popup camera. The handset includes 6 GB of RAM and an internal storage of 128 GB. It will be receiving power from 4,000mAh battery. Even though it is not mentioned in the above image, it will be arriving with an half-screen fingerprint reader.

According to yesterday’s leak, the Vivo NEX S edition is powered by Snapdragon 710 and 4 GB of RAM. It has a native storage of 64 GB. Also, it is fitted with a 6.01-inch FHD+ display. The variant that has been revealed through the newly spotted leaked images show that it is an advanced model over Vivo NEX S. Hence, it could be powered by the Snapdragon 845. However, there is no confirmation on whether it will be called Vivo NEX or NEX A. Since rumors have claimed that there could be three variants of Vivo NEX, its highest configuration edition may feature SD845, 8 GB of RAM and 256 GB of storage.

Xiaomi Redmi 6 Series to Debut on June 12, May Tag Along Redmi 6A, Redmi 6 Pro/Plus