Xiaomi Mi 8 has been going on and off the market in recent times but it appears that the supply chain for this smartphone is now stable because, after the fourth round of sales, this device is still in stock which is a good thing. It appears that this is now a good time for Xiaomi to solicit for buyers from other parts of the world. A few days ago, there were reports that the first batch of Xiaomi Mi 8 was released in France and Russia. However, recent reports suggest that this smartphone will officially debut in Europe around August. As of now, only the standard Mi 8 version will be launched in Europe, there is no information on the Explorer Edition. 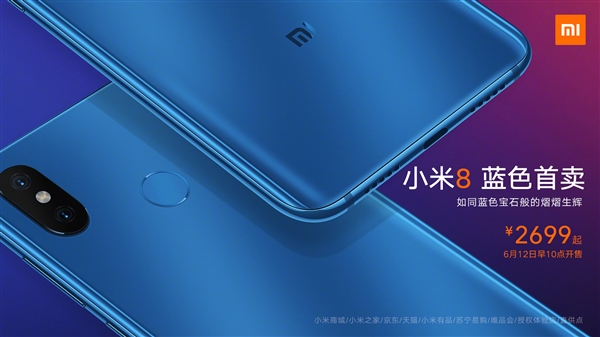 According to the source, only the black and blue color versions with 6GB+64GB and 6GB+128GB configuration will be available. As for its pricing, the 64GB version will have a 365 euros price tag, while the 128GB version is expected to cost over 400 euros.

As a reminder, the Xiaomi Mi 8 was released on May 31st in Shenzhen and it is powered by a Qualcomm Snapdragon 845 SoC. It is equipped with a 6.21-inch Samsung AMOLED wide color gamut full-screen with a display resolution of 2248×1080, a screen-to-body ratio of 86.68% and an aspect ratio of 18.7:9. The camera of this smartphone is quite impressive as it scored 05 points at DxOMark – very few smartphones can beat that. The Xiaomi Mi 8 uses a Sony IMX363 sensor and it has a 12MP+12MP dual rear camera which boasts of a f/1.8 aperture, 1.4-micron large pixels, and four-axis image stabilization. This camera setup is also capable of AI scene recognition, it supports up to 206 types of lighting effects and dual-core focus.  The front-facing camera uses a 20MP sensor. This lights of this smartphone are kept on by a 3400 mAh battery which supports Quick Charge 4.0+.

Xiaomi Redmi Pro 6 Will Come with Switch to Disable Notch