A couple of weeks ago, Chinese manufacturer, Xiaomi, released its new large-screen phablet – Xiaomi Mi Max 3. Today, the blue version of the Xiaomi Mi Max 3 was spotted on Jingdong Mall and it is currently on pre-order with a 1699 Yuan ($249) price tag. The Xiaomi Mi Max 3 was highly anticipated before its launch and its arrival was long overdue considering the launch time of its predecessor, the Mi Max 2. Amongst other things, the large display and long battery life are the major selling points of this phablet. 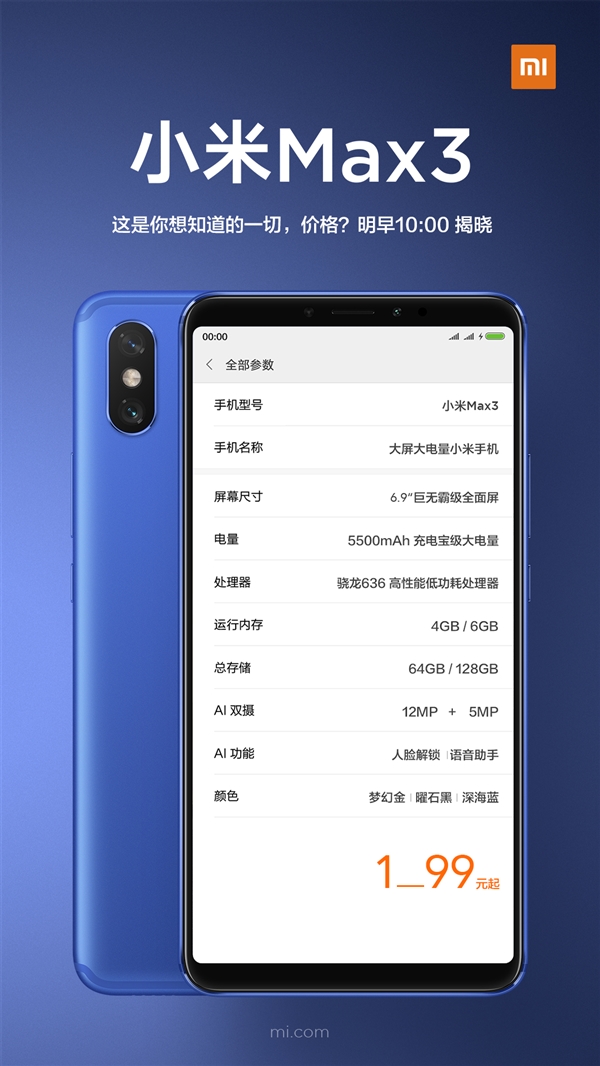 The Xiaomi Mi Max 3 comes with a 6.9 inches 18:9 AMOLED display with a resolution of 2160 × 1080 and it is currently the largest Xiaomi phablet, known as “Big Mac full screen” in some sectors. Though it is a 6.9-inch phablet, its size is technically not much different from the traditional 6.3-inch mobile phone, and it can be easily held with one hand. The Xiaomi Mi Max 3 is equipped with a large 5500mAh battery, which can play videos for 17 hours, play music for 23 hours and play games for 10 hours. Not only that, Xiaomi Mi Max 3 supports reverse charging, which means that it can be used as a power bank for other devices.

Xiaomi Mi Max 3 is equipped with a Qualcomm Snapdragon 636 processor coupled with 4GB of RAM and 64GB of internal storage. In the camera department, it has a 12MP+5MP dual rear camera setup of which the 12MP snapper has a pixel size of 1.4?m. It further supports Dual PD dual-core focus, AI intelligent scene recognition and it can identify 206 camera scenes and real-time optimization. This blue variant will be officially sold at 10 am on August 24.