A leakster from China has revealed a leaked image of the alleged front panel of the upcoming Mi MIX 2 phone on Weibo. The image shows that smartphone would be coming with very slim bezels at the top, left and right sides of the screen. The bottom bezel appears to be slightly thick compared to other bezels. It still houses the selfie camera that is located at the bottom right corner. 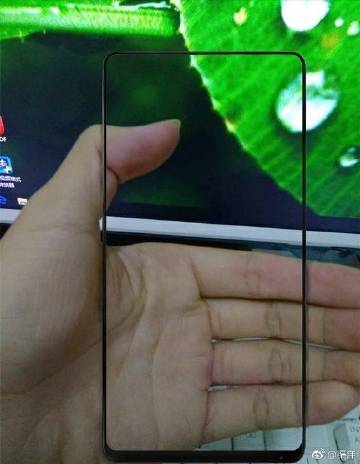 Through another post on Weibo, the leakster claims that the mass production of the Xiaomi Mi MIX 2 has already started. Recent reports had claimed that since Xiaomi had used ceramic panel on the original Mi MIX, it faced production issues. However, the upcoming Mi MIX 2 may not encounter production problems as it is expected to arrive in a full metallic body.

Qualcomm China has already confirmed that the Xiaomi Mi MIX 2 will be powered by Snapdragon 835. There are conflicting rumors about the screen size of the Mi MIX 2. Rumors claim that it won’t feature a huge display like the 6.4-inch screen available on the original Mi MIX. Some reports suggest that Mi MIX 2 is fitted with a 6-inch display and there are other reports that claim that it has a the same 6.2-inch display panel that is available on the Galaxy S8+.