ZTE is yet to officially announce ZTE K813 and BA603 that were spotted earlier and now a newer phone with model number ZTE Z986 has shown up on GFXBench.

The listing of ZTE Z986 on the benchmarking site has revealed some of its key specs. It is a phablet device that features a 6-inch full HD display that supports 1,920 x 1,080 pixels. It is fueled by 2.0 GHz octa-core Qualcomm processor and Adreno 506 graphics, which indicates it will feature a Snapdragon 625 SoC under its hood. 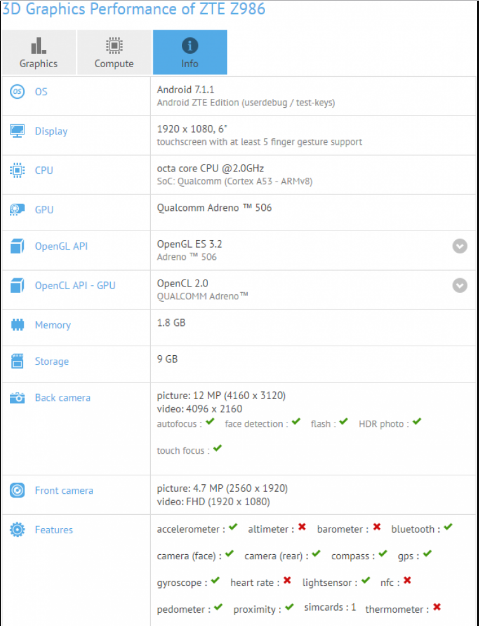 The GFXBench listing says it has 1.8 GB of RAM and 9 GB internal storage which means it will be packed with 2 GB of RAM and 16 GB of native storage. It is likely to feature a microSD card slot. it is running on Android 7.1.1 Nougat OS.

For photography, it features a 13-megapixel rear camera (shown as 12 MP on the above image) and a front-facing snapper of 5-megapixel (shown as 5 MP). The specs suggest it will be a budget-friendly phablet. In January, ZTE Z986DL and Z986U models that seem to be variants of ZTE Z986 phablet were spotted receiving Bluetooth SIG certification.