Last week, popular leakster Evan Blass had claimed that the recently launched Enjoy 7S smartphone would be arriving in the global markets with “Huawei P smart” moniker. The pricing and availability of the smartphone has now surfaced through a new report.

The Huawei P Smart is a budget-friendly smartphone that possesses a full screen design. It was officially unveiled in China in the previous month. Fresh information claims that Germany could be the first global market to receive it starting from the end of this month. It is expected to carry a price tag of 249 euros (~$299). It will be available in color options like black, blue and gold. As of this writing, there is no confirmation on the other markets that will be receiving the P Smart. 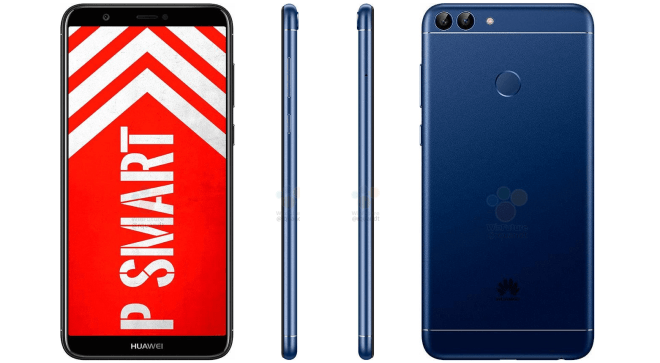 Codenamed as Figo, the P Smart phone features a 5.65-inch LCD IPS screen that delivers a screen resolution of 2160 x 1080 pixels. The FHD+ screen offers a pixel density of 428 ppi and an aspect ratio of 18:9. Because of the inclusion of the elongated display of the phone, the company has placed the fingerprint scanner on its backside.

The Kirin 659 chipset that is designed for mid-range phones powers the P Smart along with 3 GB of RAM. For storage, it features an internal storage of 32 GB and a microSD card slot.

The Huawei P Smart is a dual-SIM smartphone that includes other connectivity features like microUSB, Bluetooth 4.2, NFC, 4G LTE, and Wi-Fi 802.11 b/g/n. There is an 8-megapixel camera on the front panel of the phone for shooting selfies. The rear panel houses a dual camera setup that includes a 13-megapixel sensor and a 2-megapixel sensor. The handset comes preloaded with EMUI 8.0 flavored Android 8.0 Oreo and is driven by 3,000mAh battery.