In the coming year, Samsung and Huawei will be announcing their foldable phones. In fact, Huawei is gunning to become to the first company to unleash such a smartphone. Suddenly, a new information has surfaced today which suggests that Lenovo will launch a foldable phone in the next month. A video showing a mysterious Lenovo phone with foldable design has surfaced on Weibo. Interestingly, Lenovo has reposted the Weibo post showing the mysterious foldable phone and has also hinted that it may launch in October. 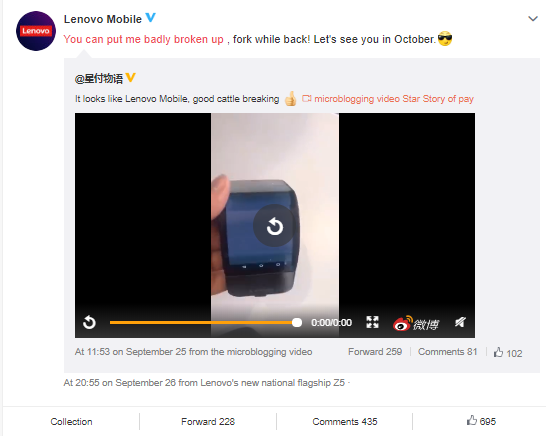 As it can be seen in the above video, the upper and lower portions of the unidentified Lenovo phone with foldable phone can fold backwards. In the recent past, Lenovo Group VP Chang Cheng had shared a video that revealed a new Lenovo smartphone with manual slider design. Rumors have it that this phone may carry Lenovo Z5 Pro moniker. Probably, Lenovo could be planning to debut a slider phone as well as a foldable phone in October.

The alleged Lenovo Z5 Pro is expected to offer a very high screen-to-body ratio and an in-display fingerprint scanner. There is no information available on the specifications of the Lenovo foldable smartphone. Probably, the rumor mill will more information on these phones in the coming weeks if they are really set to debut in October.