ZTE’s sub-brand has already teased that its upcoming flagship phone – the Nubia Z18 will be arriving with Full Screen 3.0 design. Recent leaks and the images of the phone that have surfaced through its TENAA listing has revealed that the front panel of the phone is mainly occupied by its display that is equipped with a small round-shaped notch for the selfie snapper. Today, Nubia CEO Ni Fei has shared the AnTuTu score of the company’s forthcoming flagship phone on Weibo. It reveals that smartphone managed to score an average benchmarking score of over 280,000 on AnTuTu. 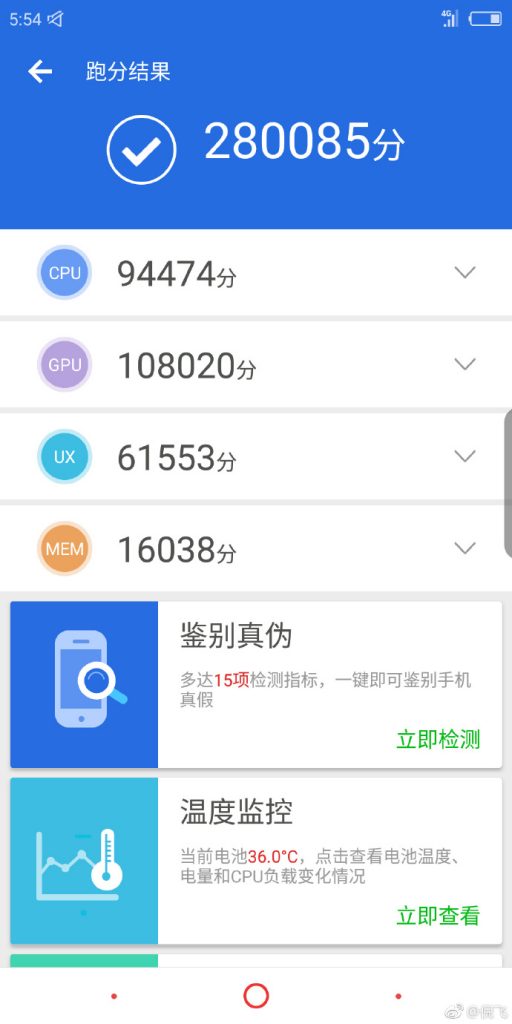 In the AnTuTu’s top 10 best performance Android phones for the month of March, Samsung Galaxy S9+ can be seen leading the pack with a score of 264,402. The Nubia Z18 has recorded a higher score of 280,085 on AnTuTu which suggests that it will deliver stellar performance.

The TENAA listing of the phone has revealed that the Z18 will be arriving with a 5.99-inch display that offers 18:9 aspect ratio and FHD+ resolution of 2160 x 1080 pixels. The Snapdragon 845 SoC will be powering the 64 GB and 128 GB storage models of the phone that respectively features 6 GB and 8 GB of RAM. It is fueled by a 3,350mAh battery. For photography, the handset is equipped with 24-megapixel + 8-megapixel dual camera setup and a front-facing camera of 8-megapixel. Nubia is yet to confirm the launch date for the Z18. Rumors are rife that the smartphone will be made official in the coming month.

Lenovo Z5 with 95% Screen Space Appears in Another Teaser