The Samsung Galaxy Note 8 was officially introduced through a launch event in New York on Aug. 23. Today, Samsung China has sent out a formal invitation that the Galaxy Note 8 would be launched in China on September 13 at Beijing 751D- PARK.

It is interesting to note that there will be three consecutive flagship smartphone launches in the coming week. Xiaomi has confirmed that there will be a launch event on Aug. 12 to unveil the Xiaomi Mi MIX 2. Apple has released press invite for the unveil event that will be held on Sept. 12 to unveil the next-generation iPhones. And Samsung will be unleashing the Galaxy Note 8 for Chinese audio on Sept. 13. 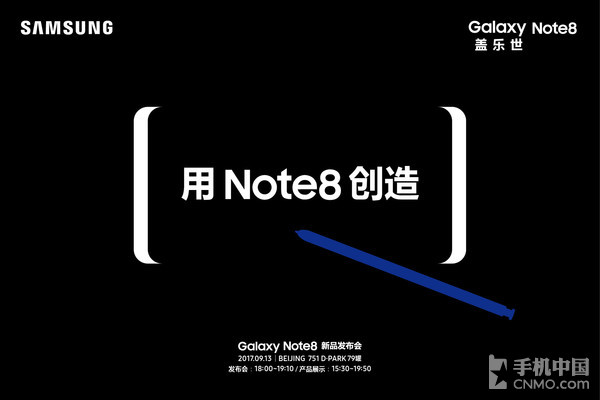 The Snapdragon 835 chipset is speculated to power the Galaxy Note 8 units in China. The Samsung phablet is rumored to arrive in China in three storage choices such as 64 GB, 128 GB and 256 GB. All the variants are tipped to come with 6 GB of RAM. The highest configuration model is likely to cost around 6,288 Yuan (~$964).

It is likely that Samsung may add some unique features for the Galaxy Note 8 users in China. It is speculated to go on sale by the end of this month in the country.

iPhone Edition Could be the Actual Name of iPhone 8