The unannounced Snapdragon 845 chipset is expected to power various flagship smartphones in 2018. Initial reports have also suggested that the Xiaomi Mi 7 would be also fueled by SD 845. A leakster from China has revealed that Xiaomi and Qualcomm have started working on brining optimized performance of Snapdragon 845 for Xiaomi Mi 7. 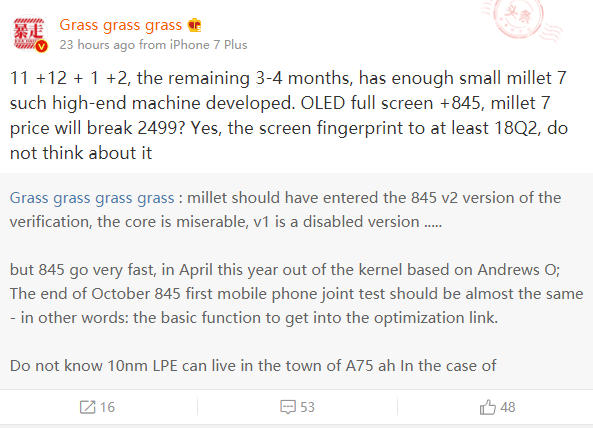 The progress of optimizing the SD 845 seems to be going on a quick pace. The initial testing of SD 845 for Mi 7 is expected to begin in November and the final testing is pegged to happen in February 2018. As previous rumors have revealed, the Mi 7 is likely to come with an OLED screen, but it may not feature an embedded fingerprint scanner.

The Xiaomi Mi & is expected to house an 18:9 OLED display of 6 inches from Samsung. It is also speculated as the first smartphone from the company to arrive with support for wireless charging. The 6 GB RAM model of the Mi 7 is expected to carry a pricing of 2,999 Yuan (~$450).

As far as the launch date of Mi 7 is concerned, recent reports have claimed that it may get unveiled in Q1 2018. The Samsung Galaxy S9 and LG G7 flagship phones are also speculated to debut in the same period.