Xiaomi will be holding an unveil event by the end of this month. A variety of new products such as Xiaomi Mi 7, Mi 8th Anniversary Edition and Mi Band 3 is expected to debut at the event. Xiaomi fans are also eagerly waiting for the arrival of Mi Max 3. Last year, the Mi Max 2 was announced in May. Hence, people are eagerly waiting for arrival of Mi Max 3. Today, Xiaomi CEO Lei Jun has confirmed through Weibo that the Xiaomi Mi Max 3 is not ready, and it won’t be showcased at the Shenzhen event. However, he has said that the successor Mi Max 2 may get official in July. 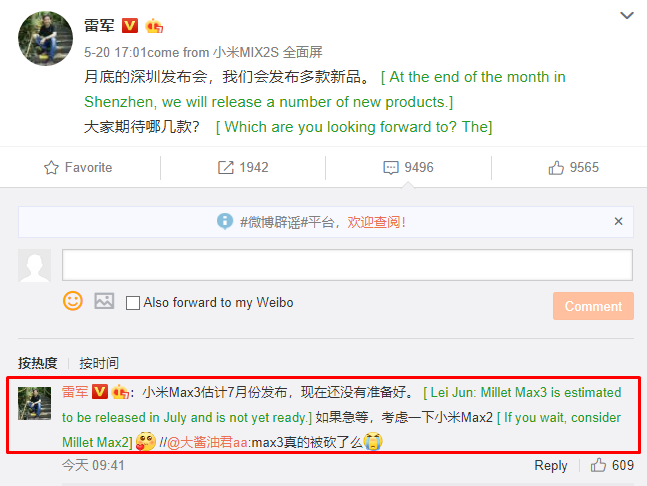 There is no official information available on the specs and features of the Mi Max 3. However, it is expected that the phablet would be arriving with a full screen design and dual rear cameras. Some of its speculated features include 5,500mAh mammoth battery that Quick Charge 3.0. It may come with support for wireless charging.

Yet Another Image Of Xiaomi Mi 8 Surface Online

Vivo Z1 from Vivo’s New Z Series Announced; Pre-sales to Begin on May 25