In the previous week, French designer Phillippe Starck who designed the original Mi MIX smartphone had revealed the conceptual design of the Mi MIX 2 on Facebook. Today, a Chinese leakster has revealed that the Xiaomi Mi MIX 2 should be releasing in the next two months. He has also revealed that Xiaomi may not release the Mi Note 3 flagship this year. 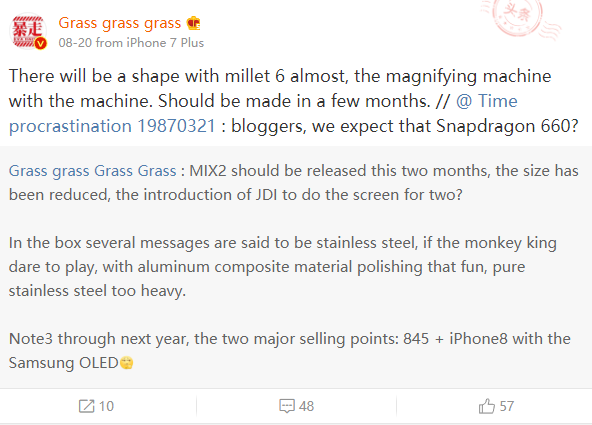 Last year, Xiaomi had introduced the Mi MIX 2 and Mi Note 3 together in October. However, it seems that this year Xiaomi may only launch the Mi MIX 2. The original Mi MIX came with a 6.4-inch display. However, the upcoming Mi MIX 2 may come with a reduced display. It is likely to feature a 6-inch full-screen display from JDI. He also claims that the Mi MIX 2 may sport a stainless-steel chassis.

The Mi MIX 2 that is allegedly codenamed as Chiron has received 3C certification for its model numbers like MDE5 and MDT5. Also, it will be equipped with MDY-08-ES Quick Charge 3.0 charger that is available with Xiaomi Mi 6. Speculations are rife that it is powered by Snapdragon 835 chipset and 8 GB of RAM.

As far as Xiaomi Mi Note 3 is concerned, the leakster claims that Xiaomi has delayed its release. It may arrive next year with an OLED screen and Snapdragon 845 chipset. The leakster has also revealed that Xiaomi may launch a Snapdragon 660 chipset powered smartphone in the coming months. It design will be similar to Xiaomi Mi 6 but may feature a larger display.