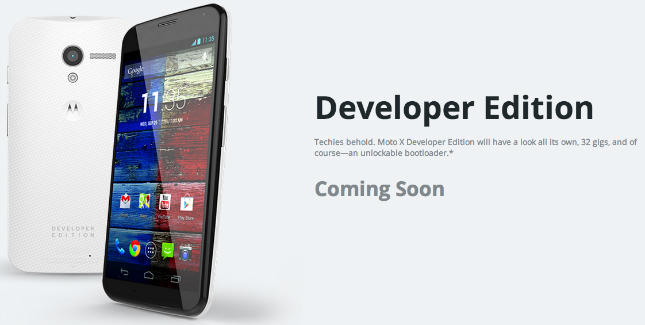 Although the Moto X has been released not long ago, it now seems like Motorola is also planning to launch a 32GB Moto X Developer Edition in the coming months as well. Motorola has already hinted on their website that the Developer Edition will be coming soon, but did not specifically tell us when the device will be arriving.

Likewise, we wouldn’t expect much different between the original variant and the Developer Edition except that the latter will be coming with an unlocked bootloader. Similarly, we can also expect the Developer Edition to cost around $50 more as well. Other than that, it will probably come with the same features and specifications as the original variant – so it shouldn’t be a big deal for non-developers.

So if you’re dying to lay your hands on this upcoming 32GB Moto X Developer Edition, then stay with us for more updates!

Pictures of the Motorola Droid 5 has been leaked