Xiaomi Poco F1 smartphone is slated to go official on Aug. 22. In the recent past, the 6 GB RAM variant of the F1 phone was spotted on Geekbench. Today, the highest configuration model of the F1 seems to have surfaced on Geekbench as the benchmarking platform now contains a fresh listing for 8 GB RAM version of the phone.

The below shown Geekbench listing of the Poco F1 features 8 GB of RAM and Snapdragon 845 SoC. The handset is preinstalled with Android 8.1 Oreo. In the single-core test, the Poco F1 has scored 2451 and in the multi-core test, it has recorded a score of nearly 9,000. 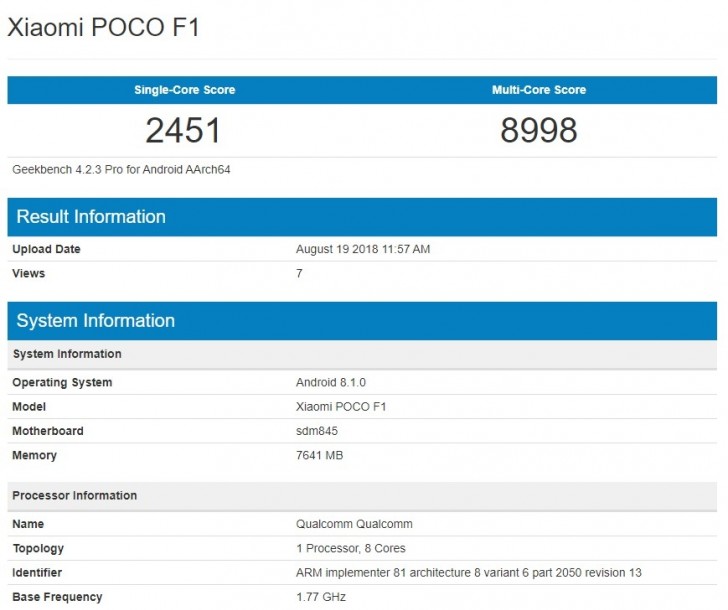 Recent reports have revealed that the Xiaomi Poco F1 with 128 GB and 64 GB of storage are equipped with 6 GB of RAM. The 8 GB RAM variant that has now surfaced on TENAA has 256 GB of storage. As far as other specifications of the Poco F1 are concerned, it is expected to arrive with a 5.99-inch IPS LCD screen that features a notch, a 20-megapixel front-facing camera, a 12-megapixel + 5-megapixel dual camera setup and 4,000mAh battery. It is speculated that the 128 GB variant of the Poco F1 will be priced nearly Rs. 25,000 ($359) in India. There is no information on the pricing of the other variants of the Poco F1.

Xiaomi To Launch A New Notebook On August 23rd