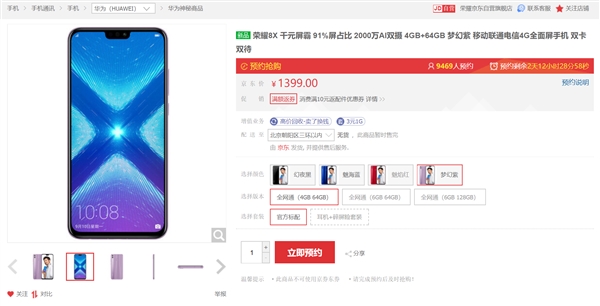 The Huawei Honor 8X is powered by a Kirin 710 processor coupled with 4GB/6GB of RAM and 64GB/128GB of internal storage. It is equipped with a 6.5-inch display with an aspect ratio of 19.5:9. This smartphone comes with a flagship design with ultrathin bezels and the chin is only 4.25 mm thick giving the smartphone a 91% screen-to-body ratio. In the camera department, the Honor 8X comes with a 20MP + 2MP AI dual rear camera coupled with a16MP shooter upfront for selfies. This device runs on Android 8.1 and the lights of this smartphone are keppt on by a 2750 mAh battery. In addition, the Honor 8X is equipped with GPU Turbo technology which improves the performance of mobile GPUs by 60% and reduces the general power consumption of the mobile phone by 30%.