Honor has been teasing on the features that will be on the Honor V20 that is scheduled to go official on Dec. 26. The Chinese manufacturer has recently confirmed through Weibo posters that the smartphone will be featuring 25-megapixel front-facing camera, 4,000mAh battery and dual-band GPS technology. Today’s poster reveals that the Honor V20 will carry support for 960 fps slow motion video shooting. 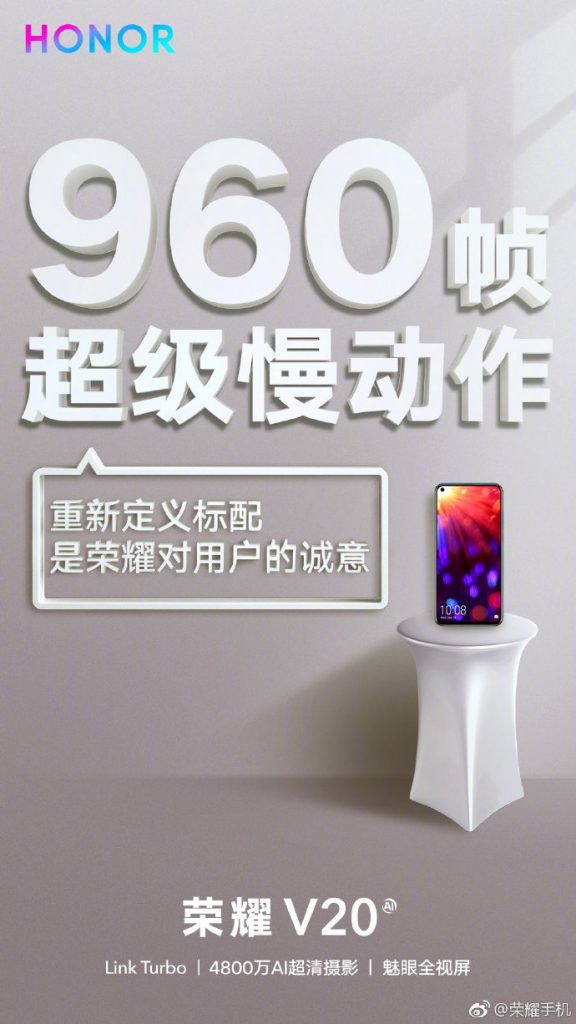 The Honor V20 is expected to release in two models such as 6 GB RAM + 64 GB storage and 6 GB RAM + 128 GB storage. Both models are rumored to be respectively priced at 2,799 Yuan and 3,299 Yuan. Rumors have it that there will be a special version of the smartphone dubbed as Honor V20 Maserati Edition.

The Honor V20 will be arriving with 6.39-inch S-AMOLED screen with a hole at the top-left corner for selfie camera. The triple camera setup on the rear side of the phone will be featuring a 48-megapixel selfie shooter. It is also tipped to feature a 3D sensing ToF camera. The Kirin 980 chipset will be present under the hood of the device. It will be preloaded with Android 9 Pie OS.