Few months ago, the rumor mill had revealed that HTC would be launching three smartphones this year. It was revealed that these smartphones are codenamed as Ocean Master, Ocean Lite and Ocean Harmony. The Ocean Master and Ocean Lite were recently unveiled as HTC U11+ and HTC U11 Life. Rumors have claimed that the HTC Ocean Harmony would be debuting before the end of 2017. A HTC smartphone with model number HTC 2Q4R400 has received 3C certification in China. Speculations are rife that the arrival of the rumored HTC Ocean Harmony phone could be close at hand.

Shown above is a screenshot of the 3C certification of HTC 2Q4R400 phone that shows its charger carries support for Quick Charge 3.0. Previous rumors have revealed that the HTC 2Q4R00 smartphone features a 5.99-inch display that will carry support for FHD+ resolution of 2160 x 1080 pixels and an aspect ratio of 18:9. Rumors have suggested that it is a toned version of the HTC U11+. 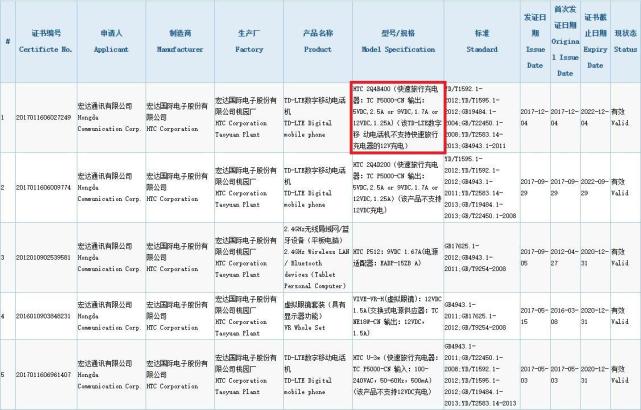 Leaked information suggest that its base model could be feature Snapdragon 652 chipset, 4 GB of RAM and 64 GB of native storage. However, some sources claim that it would be also available in Snapdragon 660 model that will include 6 GB of RAM and 128 GB of internal storage.  It is likely to include a 3,930mAh battery. It is also speculated to feature squeezable frame for Edge Sense feature.

According to Chinese media, the HTC Ocean Harmony is rumored to feature the same rear camera sensor that is available on the HTC U11+. Fresh information suggests that it may house a pair of 5-megapixel dual selfie cameras. The Snapdragon 652 and Snapdragon 660 chipset variants of the HTC Ocean Harmony are speculated to arrive with respective pricing of 2,599 Yuan (~$393) and 3,599 Yuan (~$544).

Honor V10 sold out in its debut sales, will go on sale again on December 12th