HTC has officially confirmed that it will be launching its upcoming flagship, the HTC U 11, on May 16. Even though the phone is said to be codenamed as HTC Ocean, it had appeared as HTC CBP on AnTuTu’s database. Now, the HTC CBP has also appeared on Geekbench benchmarking platform. 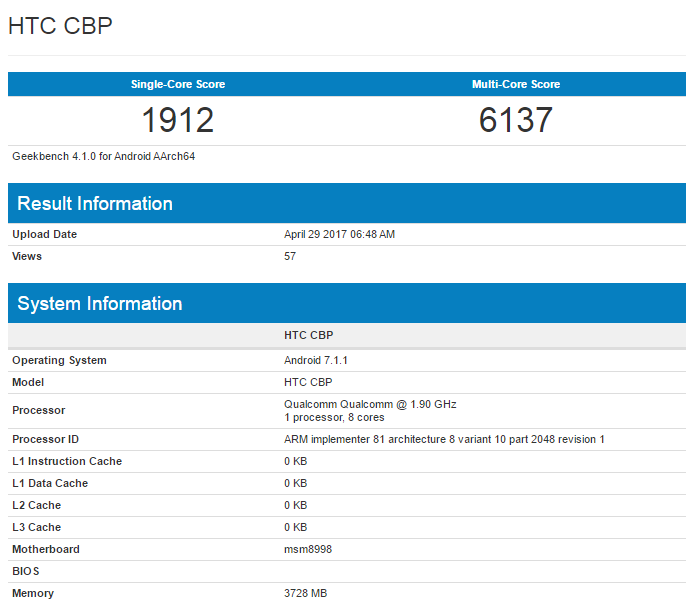 According to Geekbench listing, the HTC CBP is running on MSM8998 which means it is driven by Snapdragon 835 chipset that features an octa-core processor that clocks at 1.9 GHz. The phone is preinstalled with Android 7.1.1 Nougat OS and the SoC of the phone is coupled with 4 GB of RAM. In the single-core test, the alleged HTC U 11 has scored 1912 in a single-core test and 6173 on multi-core test.

The HTC U 11 is expected to come with a 5.5-inch display that will support quad HD resolution of 1,440 x 2,560 pixels. The USP of the phone is that it will be coming with a touch-sensitive metallic frame dubbed as Edge Sense that can be pressed for access various functions and features of HTC U 11. It is rumored to come in storage models like 64 GB and 128 GB. It has a 12-megapixel Sony IMX351 front camera sensor and 16-megapixel rear-facing Sony IMX362 camera.