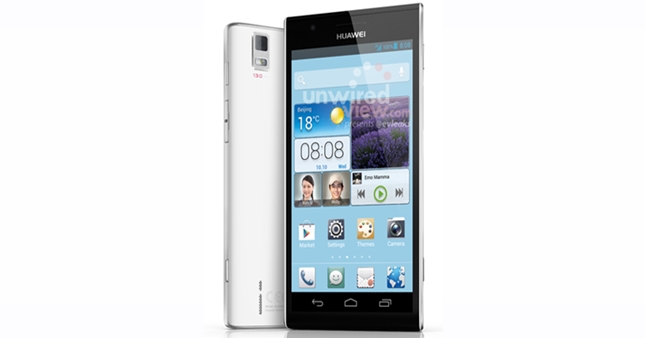 Apart from HTC M7, the Huawei Ascend P2 is another device that has been stealing the headline recently as it was rumored to be unveiled during the Mobile World Congress ( MWC ) 2013 in Barcelona. However thanks to Unwired View, we finally get to preview the first press shot of the Ascend P2 before it was officially unveiled.

According to various sources, the Huawei Ascend P2 will be packed with a promising 1.8 Ghz quad-core processor coupled with 2 GB of RAM, which enable you to have a smooth web browsing experience. To make things even better, the Ascend P2 to is also rumored to be equipped with an incredible 13 megapixels camera for users to snap high quality pictures of their everyday life. Apart from that, we can also expect the Ascend P2 to be running on the latest Android 4.2 Jelly bean, since Huawei seems to have a tradition of porting their devices to the latest software. The high-end specifications of the Ascend P2 will no doubt put them on par with other upcoming giants like the Samsung Galaxy S4 and HTC M7.

Do you think the Ascend P2 can outclass other high-end devices from the more prominent manufacturer like Samsung and LG?