After so much waiting, we’re finally left with just one more day before the Meizu Pro 7 make its official debut in China tomorrow. However, even before it has been announced, some of its key specs had already been leaked via a promotional leaflet spotted by a user on Chinese Weibo. 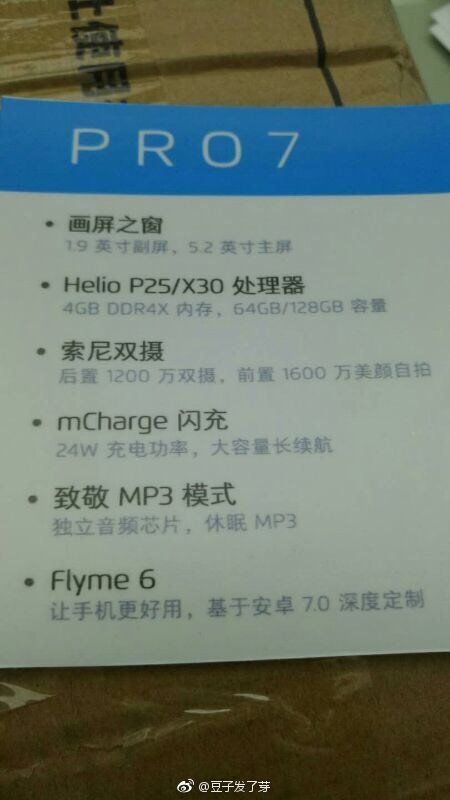 According to the leaflet, the Meizu Pro 7 will be coming with a 5.2″ front-display which will be paired with a 1.9″ secondary display located at the back of the device. As revealed by Mediatek yesterday, the leaflet also reaffirmed that the Meizu Pro 7 will be coming in two different versions with one of them running on the Helio P25 SoC, while the other on the X30 SoC. Likewise, the former is expected to come with a 4GB+64GB memory configuration, while the latter will have a 4GB+128GB configuration instead.

Other than the differences in SoC and storage space, both versions will come with Sony-made 12MP+12MP main snapper as well as a 16MP front-facing sensor. As expected, the Pro 7 will also features their in-house mCharge technology which promises extremely fast charging speed for the smartphone. Software-wise, the device will runs on Android 7.0 with Flyme 6 running atop.

That’s all pretty much all the information we can sieve out from the leaked leaflet, and for the rest we’ll need to find out during the launch event tomorrow.

Is this a farewell bid to ZUK Mobile?