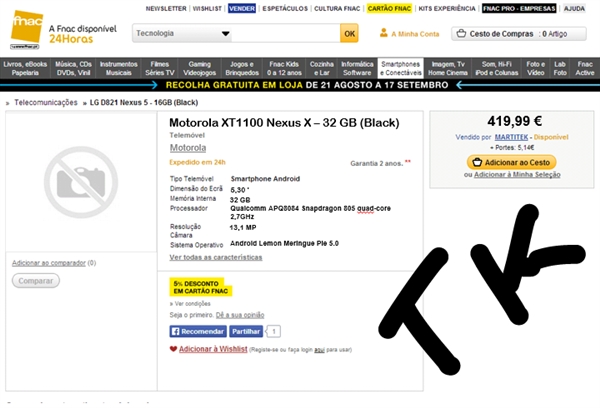 During the past few weeks, several Nexus devices has been making the headline including the Nexus X which was allegedly manufactured by Motorola. Today, the Nexus X has apparently being spotted on a French online retailer fnac and was also being tagged with a model number XT1100.

According to the retailer, the device will indeed be manufactured by Motorola this time round. The Nexus X will be available in both 32GB and 64GB version with the former having a price tag of 419.99 Euro while the latter is up for grab at 449.99 Euro.

Some of the key specifications stated include a 5.2″ FHD display, a 2.7GHz Snapdragon 805 chipset, a 13MP rear camera as well as Android 5.0 (possible Android L) running out of the box.

Although the device is already up on the retailer’s website, but there still isn’t any news on its availability so far.

How to root Micromax Canvas L A108 using vroot