HMD Global is slated to launch the Nokia 6 (2018) with full screen design on Jan. 5. The entire specifications of the smartphone have recently appeared on China’s TENAA certification body. It appears that the performance of the smartphone as it has been found listed on Geekbench. 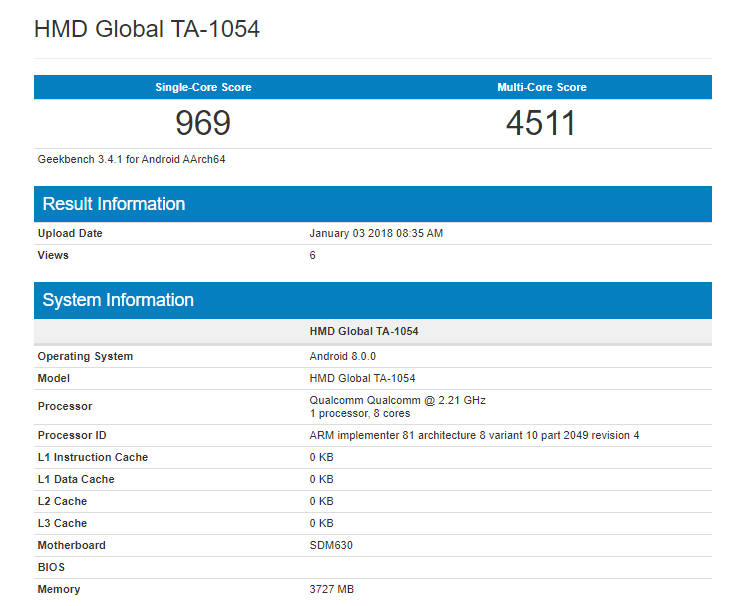 According to Geekbench listing of the TA-1054, the smartphone is driven by Snapdragon 630 chipset that includes a 2.21 GHz octa-core processor. The SoC is coupled with 4 GB of RAM. It is pre-loaded with Android 8.0 Oreo OS. In single-core test, the handset has scored 969 and in the multi-core test, it has recorded a score of 4511.

According to the TENAA listing of the Nokia 6 (2018), the smartphone will be equipped with an 18:9 aspect ratio screen of 5.5 inches. This makes it the first phone from the company to be equipped with full screen design. It is expected to arrive in 32 GB and 64 GB storage models. It is likely to feature the same front-facing and rear-mounted cameras that are available on the original Nokia 6. TENAA listing of the phone has already revealed that it would be coming in color options like White, Blue and Black. As of this writing, there is no information on the pricing and availability of the Nokia 6 (2018).