OnePlus has finally confirmed the launch date for OnePlus 5T through its Twitter account. According to the launch invitation by the Chinese firm, the OnePlus 5T will be unveiled to the world on Nov. 16 in New York. 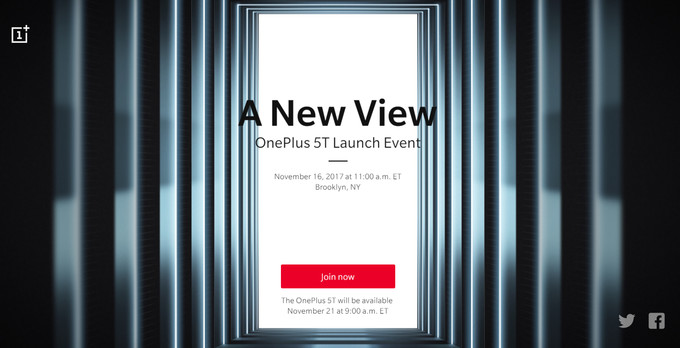 The launch event for OnePlus 5T will begin at 9 AM EST. After unveiling the OP5T, the company will be making it available for buying from Nov. 21 starting at 9 AM EST. The launch invite carries the text: “A New View.” Through this the company could be hinting that the OnePlus 5T would be arriving with a full screen design.

Rumors as well as GFXBench listing of OnePlus 5T has revealed that it features 6-inch display that carries support for an aspect ratio of 18:9. One of our recent reports had revealed that the highest variant of the OnePlus 5T that would be probably featuring 8 GB of RAM and 128 GB would be carrying a pricing of around $600.

The OnePlus 5T is also rumored to come in other model featuring 6 GB of RAM and 64 GB of storage. Like the OnePlus 5, the OP5T will be driven by Snapdragon 835 chipset. Its front side is expected to feature a 20-megapixel selfie camera and its rear may house 16-megapixel + 20-megapixel dual camera system.