Instead of launching high-end flagship phones, Oppo seems to be focusing on releasing feature-rich md-range smartphones. It has recently announced Oppo F3 and Oppo F3 Plus and now it seems to be working on Oppo R11.

An Oppo smartphone with model number R6051 has appeared on GFXBench benchmarking platform. Even though there is no official confirmation on it, the rumor mill is speculating that the Oppo R6051 phone could be the upcoming Oppo R11. The GFXBench listing has revealed that the phone features a 5.5-inch display that supports full HD resolution of 1,920 x 1,080 pixels. 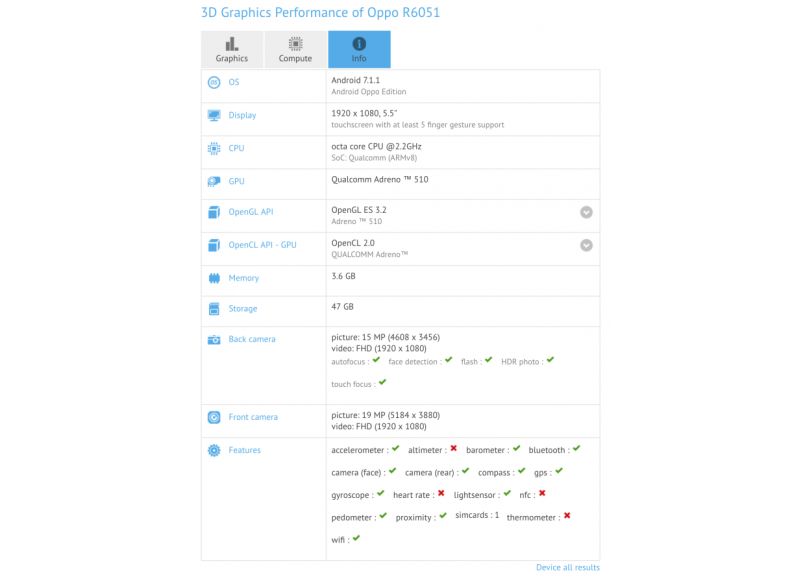 The phone features Adreno 510 graphics which means it will be probably driven by Snapdragon 626 chipset that clocks at 2.2 GHz. The SoC is accompanied with 4 GB of RAM and 64 GB of native storage. The Oppo R11 is likely to feature a 16-megapixle rear snapper with support for full HD video shooting and HDR. It may feature a 20-megapixel selfie snapper that will carry support full HD recording.

Speculations have it that Oppo may unveil its R11 phone by June in China. Just as Oppo had released R9 and R9 Plus in 2016, the R11 is also rumored to come in two models.