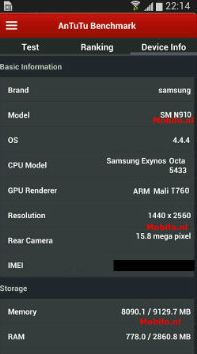 With less than 3 weeks away from the official announcement of the Samsung Galaxy Note 4, there will be no doubt more and more headlines reporting about this much anticipated phablet.

Today, we’re glad to be able to catch a glimpse at the phablet’s specifications thanks to AnTuTu Benchmark. As expected, the Galaxy Note 4 will be rocking a 5.7″ QHD display powered by Samsung’s own Exynos 5433 chipset along with a massive 3GB RAM. Other key specs include a 16GB onboard storage, 16MP rear camera, as well as Android 4.4.4 KitKat running out of the box.

However for the U.S. and other European countries, Samsung is rumored to be bringing the Snapdragon 805 version to these markets instead.

That’s all we have for now, so stay tune for more updates on the Galaxy Note 4!

How to root Huawei Ascend P7 in less than an hour