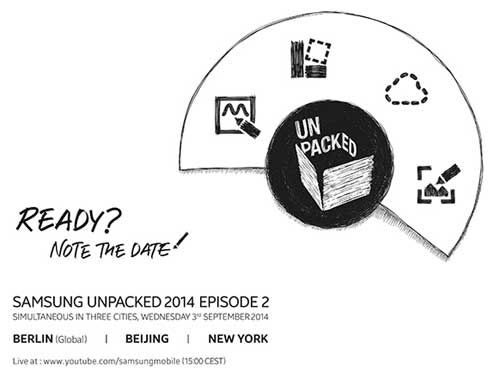 Samsung has begun sending out invites for their upcoming Samsung Unpacked 2014 Episode 2 event held in 3 cites simultaneously namely Berlin, Beijing as well as New York. This event will occur on September 3rd, one day prior to the IFA event held in Berlin which begin on September 4th.

Although Samsung doesn’t mention exactly which device to be announced during this much anticipated event, but we all know it will be none other than the Galaxy Note 4 phablet which was unveiled during the same period of time last year. Somehow, Samsung has also hinted us with the phrase “Ready? Note the date” on their invites.

We’re not sure whether is this just plain coincidence or what, but on September 3rd, Sony is also expected to announce their latest Xperia Z3 flagship as well. Seems like its going to be a great day for all Android enthusiast like us!

How to root Asus Zenfone 5 in less than an hour