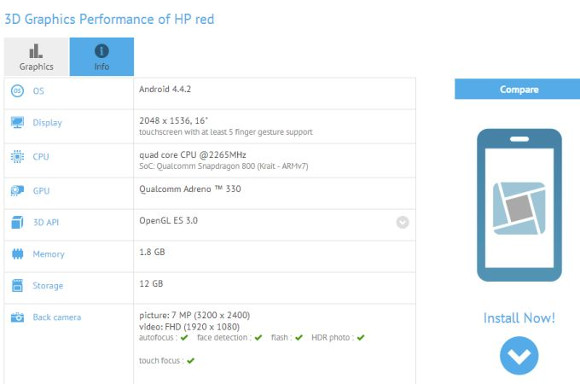 Over the past few days, there have been rumors that HP is prepping to announce 3 new tablets by the end of next month. Today, one of the tablets apparently popped out at Benchmark with a rather impressive spec sheet. According to Benchmark, one of the tablet has been dubbed as HP Red but we’re quite sure it’ll not be carrying this name on its official announcement day.

This tablet will come with a 16-inch HD display powered by a Snapdragon 800 chipset clocked at 2.3GHz together with the Adreno 330 GPU. Other hardware features include a 2GB RAM, 16GB ROM as well as a 7MP rear camera capable of recording full-HD videos. Software wise, the tablet will be running on the latest Android 4.4.2 KitKat out of the box.

According to the tipster, this device will act like a tablet PC akin to the Asus Transformer Book and will be officially named as HP Slate 16. However, he do mentions that this will only be unveiled during the IFA event on September 5th unlike other rumors which claimed that it’ll be announced next month.

Another screenshot of the upcoming Huawei Emotion 3.0 has been leaked

How to root Goophone One M8 using vroot