In 2015, Xiaomi had released the Mi 4c as a lower configuration model of the Xiaomi Mi 4 flagship. The Xiaomi Mi 5c was released last year an affordable variant of Xiaomi Mi 5 flagship. The company is now rumored to be working on a lower-end version of the recently released Xiaomi Mi 6 flagship phone. The alleged phone that is codenamed as Xiaomi Jason has appeared on GFXBench. 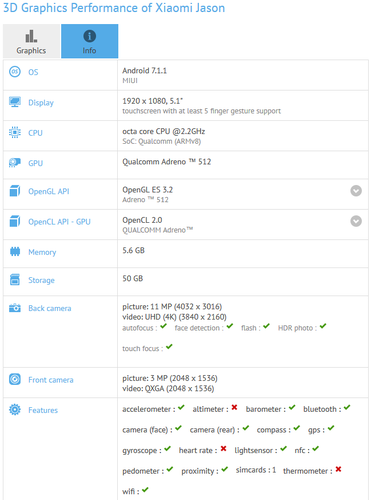 The Xiaomi Jason features a 5.1-inch screen that offers a full HD resolution of 1,920 x 1,080 pixels. It is powered by Snapdragon 660 SoC that features a 2.2GHz octa-core processor and Adreno 512 graphics. It features 6 GB of RAM and is packed with an internal storage of 64 GB. It features a 12-megapixel rear camera and a 5-megapixel frontal shooter. It will arrive with Android 7.1.1 Nougat OS.

The major difference that sets the alleged Xiaomi Mi 6c from the Xiaomi Mi 6 flagship is that the latter features the Snapdragon 835 SoC. The other difference that can be seen through GFXBench listing is that Mi 6 has 8-megapixel frontal camera, but the Mi 6c will be coming with 5-megapixel selfie camera. As of this writing, there are no details available on the launch of Xiaomi Mi 6c. Although Xiaomi’s CEO Lei Jun had earlier played down rumors of the Mi 6c, but that doesn’t mean the company will not change their mind.