Xiaomi Mi MIX 2S is one of Xiaomi’s 2018 flagship devices. However, since the arrival of the Xiaomi Mi 8 series, this device has slowly lost its relevance and many Mi fans are even going for the quasi-flagship Xiaomi Mi 8 SE instead of the Xiaomi Mi MIX 2S. However, the company is doing all it can to make this device of relevance again giving that it is only a couple of months old. Firstly, it became the first Xiaomi device to get the recently released Android 9 Pie beta update which is quite interesting. Now, the company has launched the Emerald Green version of the MIX 2S. 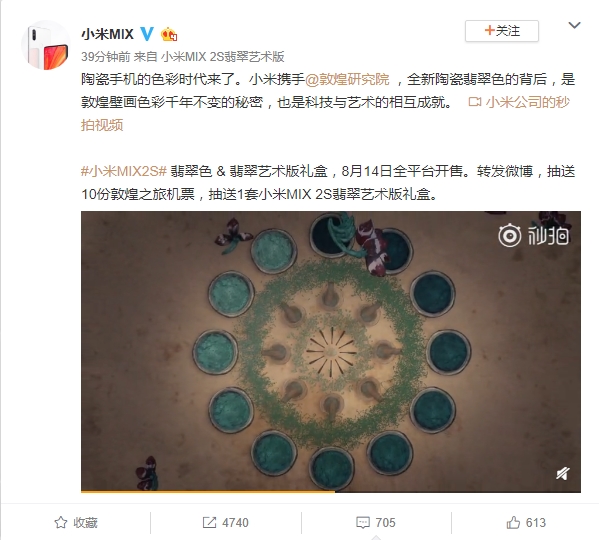 This device draws its design inspiration from the Dunhuang murals, 25 km SW of the city of Dunhuang in Gansu Province. It was developed by Xiaomi and Dunhuang Academy for almost a year before the final design was gotten. In terms of specs, it is completely the same as the regular Xiaomi Mi MIX 2S, the only difference is the design. As a reminder, the Xiaomi Mi MIX 2S is powered by a Snapdragon 845 processor coupled with 8GB of RAM and 256GB of storage. It is equipped with a 5.99-inch 2160×1080 display  and in the camera department, this smartphone boasts of a 12MP + 12MP dual rear camera which supports four-axis Optical Image Stabilization (OIS). The first official sale of the Xiaomi Mi MIX 2S Emerald Green edition is expected to take place on August 14.