Yesterday, Xiaomi had teased that the Mi MIX 2S will be coming with facial recognition feature. Today, it has released another teaser that the reveals that its dual rear cameras will be able to identify various kinds of scenes to snap better photos.

The Chinese manufacturer has released a new teaser video on its Weibo account which shows that it will be detect scenes like flowers, sunset, buildings, food and so on. The text at the end of the video states that it has a pair of eyes to detect different scenes which probably hints to its dual camera setup. 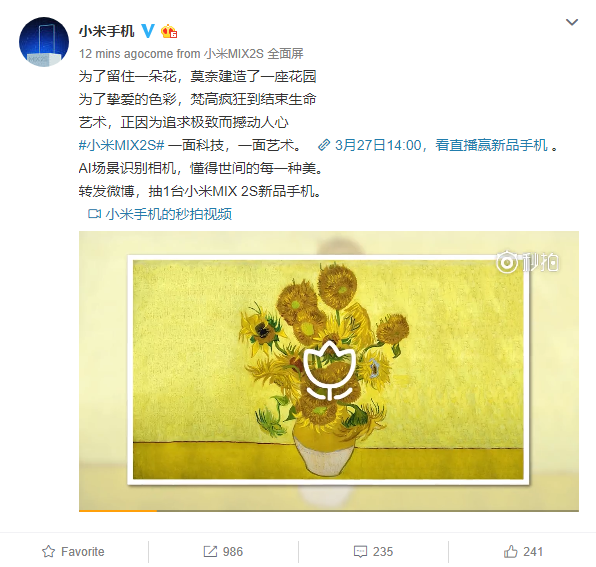 It appears that one of the USPs of the upcoming Mi MIX 2S will be its dual rear cameras as the Mi MIX and Mi MIX 2 predecessor have featured single rear camera. Rumors have it that the Sony IMX363 could be the main camera sensor of the Mi MIX 2S. It has been also revealed through the firmware files of the phone that it will carry support for 1080p slow-motion video shooting at 120 fps and multi-frame noise reduction. However, there is no information available on the exact configuration of the Mi MIX 2S’ dual camera setup.

It is speculated that the Mi MIX 2S will be housing a 6.01-inch FHD+ display. It will be powered by Snapdragon 845 chipset and 3,400mAh battery. The Mi MIX 2S is likely to run on Oreo OS flavored with the latest MIUI 9. It is likely to arrive in 6 GB and 8 GB RAM options and multiple storage choices like 64 GB, 128 GB and 256 GB.